SheilaPosted on May 10, 2020 Posted in Scots in South America

About 1836 my maternal great grandfather John Storrie was born to William John Storrie and Agnes Donaldson.  I believe that he was born in Dublin, but younger siblings were later born in Randalstown, Ireland.  Note that the spelling of Storrie has varied over the years and from record to record. By the time of the 1851 Census the family had moved to Old Kilpatrick in Dunbartonshire. 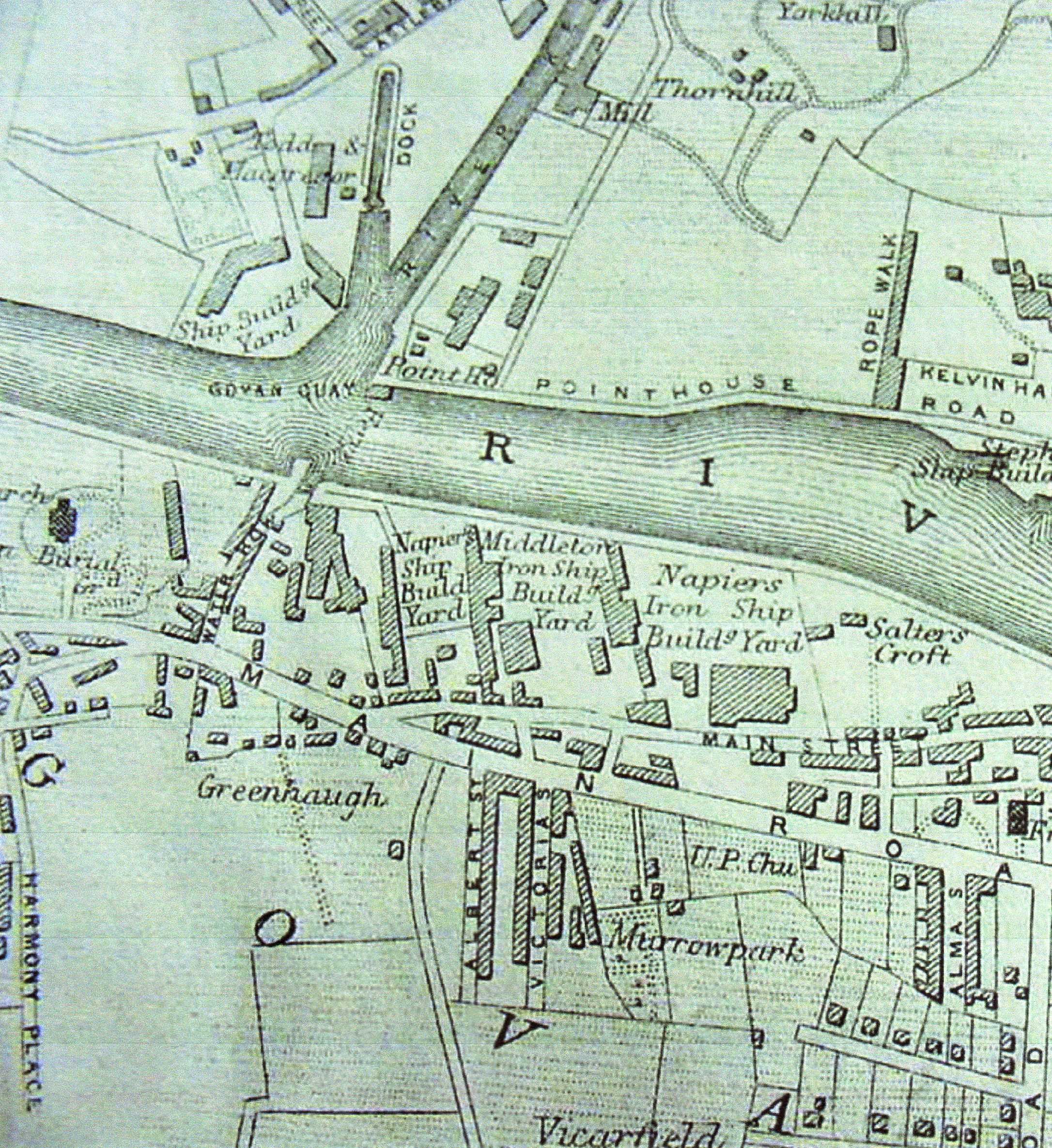 One year less 2 days later, on 15th July 1864, John registered the birth of his son, John at his parents’ house in Albert Street, Govan.  He still had the same occupation.

In that same year, John Elder laid out the Fairfield Yard at Govan.  See map —>

Note the distance along the Govan Road from Albert Street to the Burial Ground.  The Fairfield Yard was located about the same distance again to the West.

John Elder was a partner in the marine engineering company of Randolph, Elder & Co. The firm prospered, becoming John Elder & Company in 1868, and taking over the Fairfield shipbuilding yard in Govan. It soon became a world leading company.

Let us assume that John Storrie was employed at the Fairfield Yard or one of the other nearby yards.

Sadly, on 3rd December 1865, John McIntyre registered the death of his daughter, Flora from “typhus fever” in Garscube Road, Glasgow.  So we know that John & Flora were living down the road from her parents.

Question: Why did Flora’s father record her death?  Why not John?  Was he away on business – in Peru for example – see the unfolding story below.

Having searched many records, I can find no record of their son, John.  Did he succumb to typhus? Was he adopted by others?

Our Storrie story now leaps to Peru; in those days the journey would have been long and difficult.

………………….. still in Callao bay ……………………………..  Amongst the arrivals during the fortnight are the Tacna and San Luis, from the Clyde, with part of the iron floating dock for the Callao Dock Company. The remainder of the mechanics for the fitting up of the dock, arrived by last steamer from Glasgow via Panama, so that this truly important work may now be considered as in a fair way of realization.

Now consider these extracts from “Two years in Peru, with exploration of its antiquities” by THOMAS J. HUTCHINSON 1873. (First arrived in Peru in April 1871)

……………… other matters are to be noticed in the Bay of Callao ……………….. we cannot help observing the floating dock ………………………. The floating dock is one of the most important institutions on the Pacific coast of South America ……………………. The dock was made at Glasgow by the eminent firm of Randolph, Elder, and Co., for a sum of 42,000Z; the whole expense of freight, insurance, &c., from Glasgow being at the cost of the Dock Company.  The material, consisting of plates, rivets, angle-irons, pipes, machinery, &c., was sent out by sailing vessels, and amounted to nearly 2,900 tons in weight.

During the year 1868, Callao was visited with a triad of misfortunes. On the same evening that the great yoloanio wave swept over Arica**, came a similar one, though less in volume, to menace Callao. Accompanied as it was by terrific earth-shakings, many of the inhabitants fled to Lima and Bella Vista. ……………………………. and, to crown all, appeared the yellow fever, which swept away in a short time nearly two thousand of the inhabitants.

We had assumed that John Storrie went to Peru to work on the railways, but it is entirely possible to surmise that either he may have already been sent to Callao to commission the floating dock or later, in his grief over losing Flora, he took an opportunity to join the mechanics in Callao.  We have no evidence either way.

However, we do know that 4 months after the Callao earthquake, on 6th December 1868, John Storrie (now 29) married Catherine Linehan (23), daughter of Daniel Linehan, stonemason, in the British Consulate in Lima.  Their residence was Callao.  John’s occupation was “boilermaker”and he described himself as a “bachelor”, rather than a “widower”.  So had he told Catherine about Flora?

Almost 3 years later, came John’s second marriage in the same Lima Consulate.  On 2nd September 1871 he married Margaret Hay (26), the lady I know to be my great grandmother.  John described himself as “widower”.  Their residences were still Callao and John’s occupation was unchanged from boilermaker.

So what had happened to Catherine? Was she a victim of the yellow fever?  I have found no record of her death.

From Margaret’s 1925 death certificate, we know that she was the daughter of John and Margaret (nee Fleming) Hay.  Several censuses tell us that she was born “about 1844 in Dundee”.  Her father, John Hay was a “jute warehouse storekeeper” and we do know that jute has long since been associated with both Dundee and Callao

On 15th December 1871, their first born, John Hay Atwall Storrie – my grandfather – was born.  In all subsequent census records, his place of birth was listed as South America or Lima, Peru,

The question is, when did the family return to Scotland?  We do know that on 18th February 1875 John and Margaret’s second child, Charles was born in Kinning Park, Glasgow. So home again.