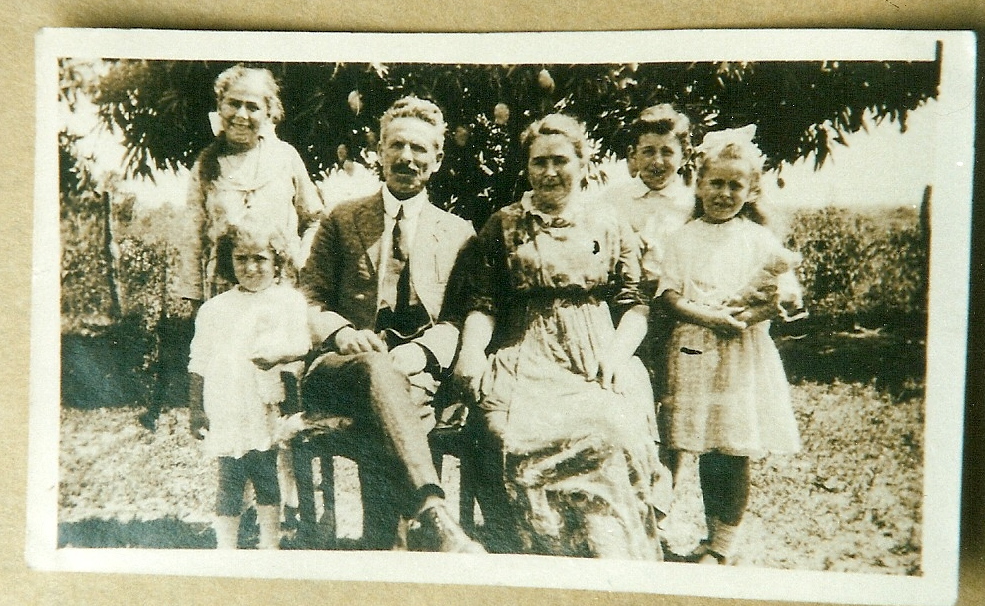 My grandfather was Henry Whittington (always known as Harry); his birth on 5 October 1878 was registered in Carndonagh in Co. Donegal; the family was living in Fairview. Harry was the eighth of twelve children, three of whom died in childhood. His parents were Henry Whittington and Agnes Whittington née Donaldson who lived at various addresses around Bohillion, Burt and Carndonagh; Henry senior is variously recorded as a farmer, labourer and land steward. At some point after Henry’s death in 1892, Agnes and the three youngest children moved to Derry. Of the nine surviving children four continued to live in what is now Northern Ireland, four emigrated to North America and Harry followed his own route.

Early in the 20th century Harry was living in Glasgow and studying to become a missionary. It is unclear whether he came to Glasgow for that purpose or for some other reason and then felt this vocation. He became a missionary with the Inland South America Missionary Union (ISAMU) often working with John Hay, a Scotsman. At this point ISAMU was planning to work among the indigenous peoples of the Chaco in Paraguay and the neighbouring areas of Brazil.

Harry sailed from Glasgow in March 1907 and began his work in the large village of Horqueta in central Paraguay. In 1910 he moved some 300 miles away to begin working among the indigenous people in the remote area of Santa Teresa, several days journey from the nearest railway station at Villarrica.

Some 18 months later he there received a letter from Headquarters in Edinburgh letting him know that Mary Donaldson, his fiancée, was about to sail to Buenos Aires. Due to the slowness of communication, she had already arrived in Buenos Aires when he received  this letter. He then rode several days through forest and swamp to Villarrica where he got a train to Concepción and there awaited a river boat for the 1000 mile journey to Buenos Aires. He arrived there six weeks after setting out; by happy chance this day, 6 August 1911, was my grandmother’s birthday. Three days later they were married twice: a civil ceremony required by Argentinian law and a religious ceremony conducted in a Sailor’s Home by a Lutheran pastor.

After the couple’s return to Santa Teresa, ISAMU reviewed its work in the area. It was decided to withdraw from Santa Teresa, focus in Paraguay on Villarrica and extend its work to the Terena people in the neighbouring area of Brazil in Mato Grosso do Sul. My grandfather and John Hay made an exploratory journey on horseback, arriving among the Terena on 21 August 1912, five days later reaching Bananal where they were to establish their mission. My grandfather, grandmother and infant daughter (my aunt) left Villarrica for Brazil on 11 May 1913, travelling by steamer, launch and train to arrive at Taunay station where they had to camp beside the railway for some weeks before obtaining permission to enter Bananal.

They remained in Bananal until October 1925 when, with their four children, they returned to the British Isles, this time to Edinburgh, where my grandfather became a minister of the Free Church of Scotland, later moving to be minster in Shettleston in the East End of Glasgow. During that time he built and furnished, largely with his own hands, a house, church and school; he himself acted as teacher.

I find Harry’s work in Bananal interesting: partly because my mother, born in 1917, lived there for the first eight years of her life, which she clearly loved; partly because I wonder about his legacy. I am aware of the criticisms that are made of Christian missionary activity and he shared many of the views of his period: a Christian life implied the adoption of all the attitudes and trappings of European civilisation and the abandonment of traditional values. But in his case it also involved respect for people and a deep concern about their social and economic exploitation.

Following later splits in ISAMAU, the church which he built in Bananal now belongs to the União das Igrejas Evangélicas da América do Sul (UNIEDAS), a denomination organised by and serving indigenous groups. The Terena people are one of the Brazilian groups which have at least to some extent preserved their identity and language; there are several schools using Terena as the language of teaching and learning. It appears that this survival can be partly attributed to the church which has now integrated aspects of traditional belief and custom.

Life for the missionaries was hard, physically, practically and emotionally. Paraguay was probably the poorest country in South America, still suffering the after-effects of the War of the Triple Alliance of 1864-70 in which the country lost 2/3 of its population. During their married life in Paraguay my grandparents were caught up in the Civil War of 1911-12; on several occasions they were subject to threats of physical violence and to actual theft and robbery. Apart from such external events, missionary work itself was physically demanding: building and furnishing one’s own house and church, sleeping and eating in the open, travelling hundreds of miles on horseback, by canoe or by slow trains and steamers. It was necessary to negotiate with local authorities and powerful men, to find accommodation, to buy and grow food and to deal with illness and accident, while all the time dressing like middle class Edwardian Europeans. The emotional demands were also considerable: a sea away from one’s family, loneliness, hostility from powerful members of local society, moved variously by loyalty to the Catholic church, by commitment to Positivism, adopted as the guiding philosophy of the Brazilian government, or by plain suspicion of newcomers, while all the time working in a new language.

(Note: Harry wrote an account of these years, On the Indian Trail in Paraguay and Brazil, published by the Free Church of Scotland’s Knox Press in 1965. My mother wrote a brief memoir of her life in Bananal for her grandchildren. A video commenorating the centenary of the founding of the church in Bananal can be accessed at https://www.youtube.com/watch?v=TF1lshNc5UE)