SheilaPosted on April 1, 2020 Posted in Scots in South America 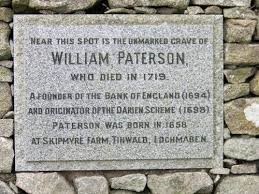 This was a major Scottish tragedy, brought about when William Paterson, an Scotsman who had gone to England and prospered, being a founder of the Bank of England, was convinced by a sailor called Lionel Wafer that there was a paradise on the Isthmus of Panama and this was called Darien.  Paterson realised that any settlers there could open up an overland route between the Atlantic and the Pacific.

He attempted to raise funds for an expedition but the East India Company would hear nothing of it and stopped Paterson from raising money in England.  At this time,  the late 17th century, relations between Scotland and England were similar to those at present with the Scots resenting and resisting domination by the English.

Undaunted, Paterson and his colleagues turned to the Scottish people for support. Thousands of Scots, both rich and poor, flocked to subscribe, and within 6 months £400,000 had been raised to set up a Scottish empire in the new world.

Five ships set sail from Leith harbour on 4th July 1698 with the 1,200 settlers on board, landing at a spot they named New Caledonia and setting to work to build a settlement.  However they were doubly stupid.  First, they had been so convinced that Darien would provide all the food they would need, that they had brought what they saw as trading goods rather than food.  Second, they started to set up base on the first place they saw, a boggy swamp, and encountered the same health problems as those who dug the Panama Canal 200 years later.  Consequently, they dropped like flies from disease and starvation.  However the final nail in their coffin was that the East India Company blocked all attempts by them to trade and finally they abandoned the settlement and headed back to Scotland, only one ship making landfall with 300 people on board.

A further 3 ships set off the following year, unaware of the fate of the earlier ones, and these settlers, by now an unruly mob, decided to attack a Spanish settlement on the mainland. Ironically, this was initially successful, but it so annoyed the Spanish that they then surrounded the Scots, forcing them to surrender in 1700. The survivors were allowed to get back on their ships and return, in humiliation, to Scotland.

Of the 2,500 colonists who had left Scotland, barely a few hundred returned. This costly and high-profile failure caused the bankruptcy of the Scottish government and was a major contributory factor in weakening resistance to the loss of Scottish sovereignty to London through the Act of Union less than a decade later.

The land where the Darien colony was built, in the modern province of Guna Yala, is virtually uninhabited today.

“Darrien: A Journey in search of Empire” by John McKendrick