SheilaPosted on April 5, 2018 Posted in Irish in South America 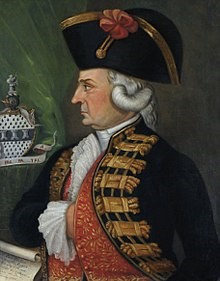 Although not as well known as his son, Bernardo O’Higgins, Ambrose had an impressive career in South America.  He was born at his family’s ancestral seat in Ballynary, County Sligo, the son of Charles O’Higgins and his wife (and kinswoman) Margaret O’Higgins, who having lost their lands in Sligo migrated and became tenant farmers at Clondoogan near Summerhill in County Meath ca. 1721. Along with other members of his family Ambrose worked in the service of the Rowley-Langford family of Summerhill House.

In 1751, O’Higgins set sail for Cádiz which at the time was popular with Catholic Irishmen.  There he worked as an employee of the Butler Trading House before heading to Spanish America in 1756 to trade goods on behalf of a group of Cadiz merchants.

Once there, and for some time, he was an itinerant trader in Venezuela, New Granada and Peru. In 1761 he was hired as a draughtsman by John Garland, an Irish-born captain in the Spanish royal engineering corps, and they were charged with repairing fortifications in southern Chile. The two Irishmen manufactured 220,000 bricks on site in pursuit of that effort.

In southern Chile he was a frequent guest at the home of a landowner named Simon Riquelme. In 1778 ( aged at least 50!) he impregnated Riquelme’s teenage daughter Isabel. He funded the education of Bernardo Riquelme but never met his son.

A decade later O’Higgins was anointed first barón de Ballinar – a local take on his home place – by the Spanish king and promoted to Governor of Chile. O’Higgins used his position to abolish the encomienda system of forced labour for indigenous peoples. He also clamped down on drinking, dancing, satirical verse and fraternisation between unmarried men and women.

In 1795 he was made Viceroy of Lima, the highest royal official in Spanish America. The Chilean city of Vallenar, and Vallenar Bay in Alaska, were both later named in his honour.

“Paisanos: The Forgotten Irish Who Changed the Face of Latin America” by Tim Fanning