SheilaPosted on April 5, 2019 Posted in Scots in South America 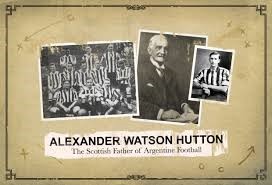 He was born in Glasgow (10/6/1853) to Robert Hutton and Ellen Watson at 29 Eglinton Street, in a tenement where now sits the O2 Academy.

After the early death of his parents he moved to Edinburgh where he attended Daniel Stewart’s School, then Edinburgh University, graduating with an MA in Philosophy before taking up a teaching post at George Watson’s.

He emigrated to Argentina in 1882.

He started off by teaching at St Andrew’s Scots School in Buenos Aires before moving 2 years later to found the Buenos Aires English High School.  Sport was high on his agenda in both schools where he introduced football as part of the school activities, adding to rugby and cricket.

In his own school in 1884 he planned out the first football pitch in the country for his students to play, and brought the very first footballs into the country in 1886, which came on order via Liverpool on the ship Caxton.  He set up a mini league between his school and other schools and organizations (where Watson sometimes worked as a referee), such as his former employer Saint Andrew’s School, and teams including railway workers.  In 1893 he developed this to establish the first Argentina Association Football League, a historic precursor to the actual Asociación de Fútbol Argentino which continues to this day.